This week’s photo is a view of the interior of the Savannah International Trade and Convention Center. It is a nice enough image, but it came to be selected for a different reason. I was working on a review of art effect tools for preparing “sketches” from photographs. Such tools are plentiful, you can find one in Picasa, FastStone Image Viewer, and other photo editing programs. You can even come close to that effect with the Word 2010 “Photocopy” art effect filter.

To evaluate a number of these tools I picked some photos with strong lines, strong contrast as well as some more typical photos. For the “strong lines” photo the interior image stood out – so it is also The Weekly Photo. 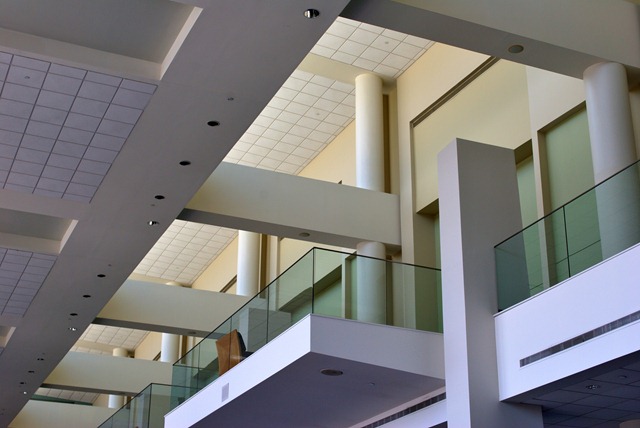 Now for a little more of the story. Let me start by showing you some of the “sketches” from this photo. 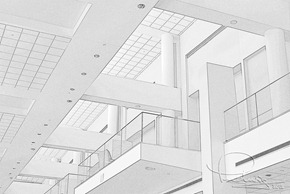 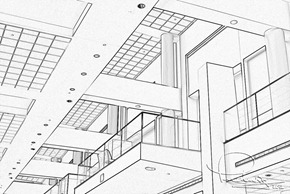 You can see larger views of these pictures by clicking on them – they take you to my Picasa Web Album, now Google+ Photos. As produced by these tools, the effects are realistic as “pencil sketches”, but I find them typically unsatisfactory as images. They are too light – I guess I never liked the #2 pencil. The loss of color also bothers me. Picasa offers “Fade” which in other programs is called “transparency”. This slider allows more or less of the original photo to “shine through”. The next two examples illustrate that. 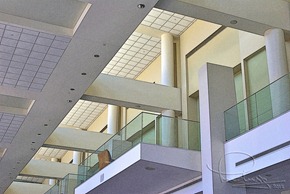 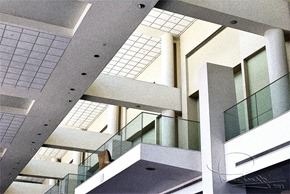 Often I like to use several tools, working on the same image, until I see what I like or wanted. Here is such a “sketch”: 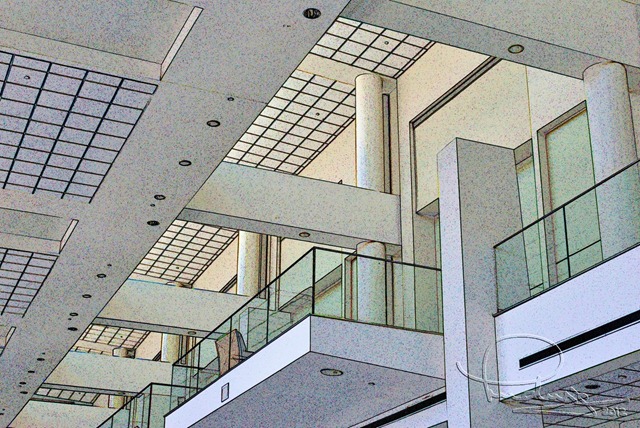 This image enhances the lines and still shows the soft colors of the original.

Here is a sketch, maybe more like a heavy-handed crayon drawing. As you can see, the sketch tools can be used in varied and very personal ways. 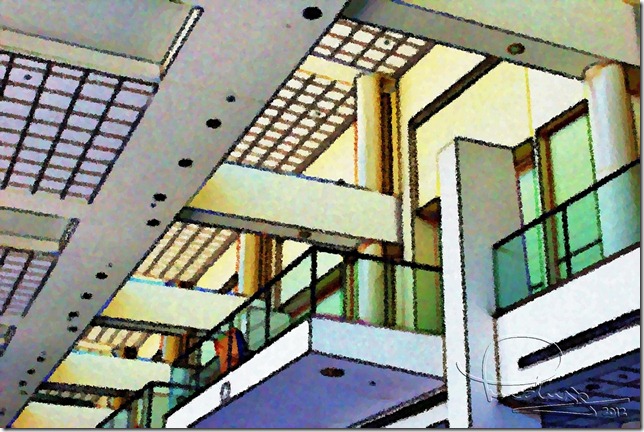 Here are other two images to illustrate the sketch tools. 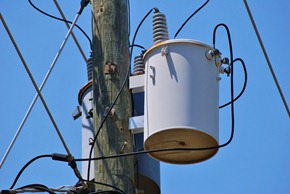 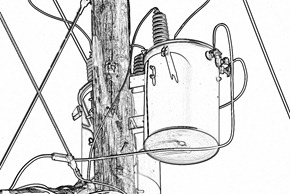 The photo has strong areas and lines, the “sketch” effect is very realistic. It seems a bit too stark. So here it is with some drawing paper added as background – much more satisfying to me. 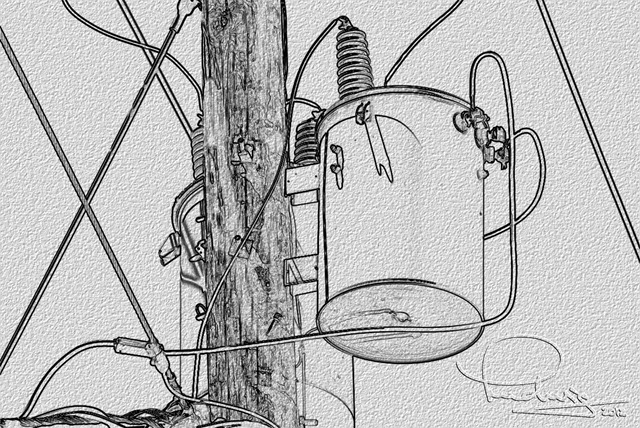 One final picture along this line – my friend the robin. 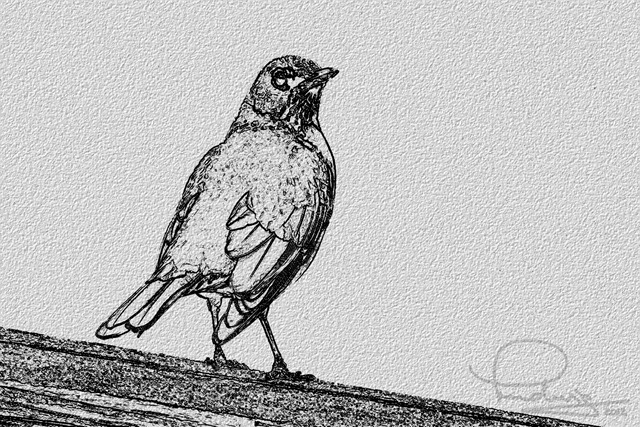 Our gardenia bush is now in full bloom. Usually that does not happen until June, but everything is rushing the seasons this year.

Gardenia blossoms are gorgeous, fragrant white flowers, but hey last just a short time. Photographing them has been a challenge for me. Our gardenia gets dappled sunshine in the morning, by early afternoon it is mostly in the shade. So the combination of light and blossom development has to be just right. Wait an hour for better light and the blossom will already show yellowed edges or it sprawls all over. The difficulties for me don’t end there. My camera has trouble focusing on the all white blossoms, and the depth of field is rather shallow for these nice big flowers even at small apertures. With my aging eyes I can’t focus manually. So it is usually one in a dozen at best.

Here is todays effort, taken early in the morning. 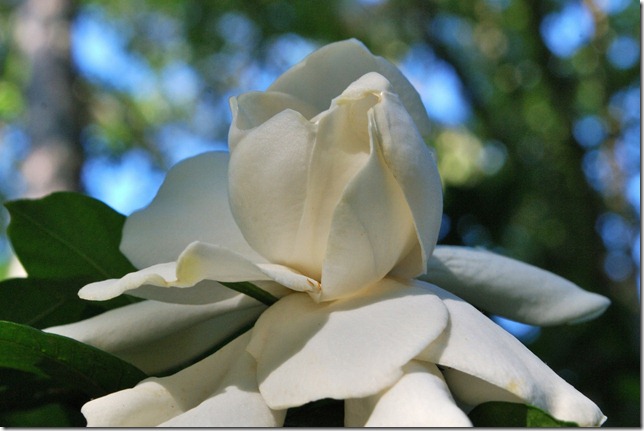 At post time, in the late afternoon, this blossom is well beyond prime. No retakes for these volatile gems.

Then there are the little problems uploading to Picasaweb, or is that the former Picasaweb, setting the access with the new sharing method, and linking to the photo. Hope it works for you. (Leave me a comment if it doesn’t, please.)

Posted by Ludwig at 5/20/2012 05:41:00 PM 5 comments
Email ThisBlogThis!Share to TwitterShare to FacebookShare to Pinterest
Labels: The Weekly Photo

Here a happy family and a couple of paintings. All to wish our mothers a most wonderful Mother’s Day! 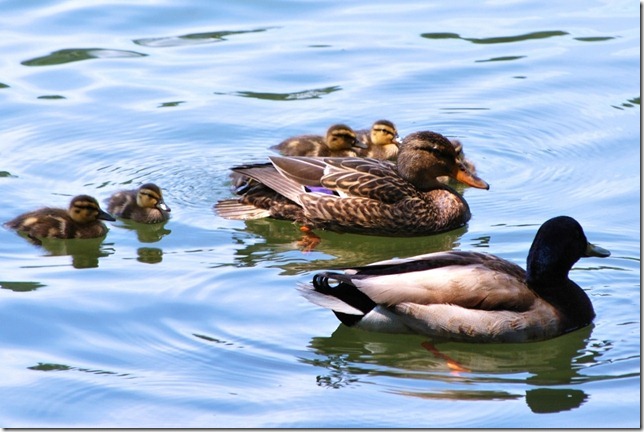 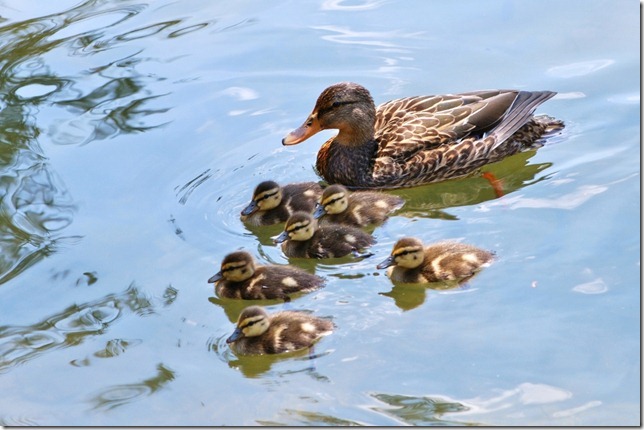 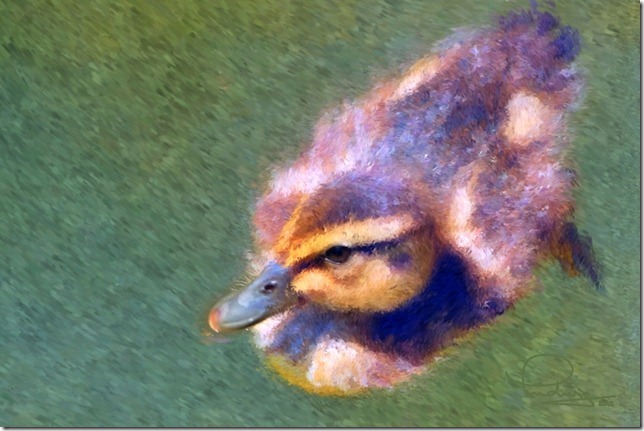 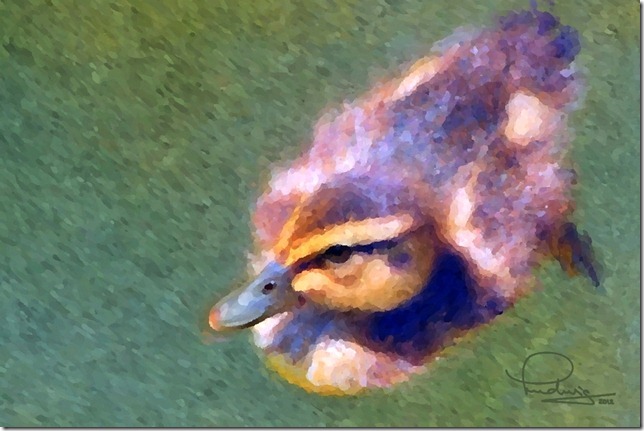 Posted by Ludwig at 5/12/2012 06:16:00 PM 3 comments
Email ThisBlogThis!Share to TwitterShare to FacebookShare to Pinterest
Labels: art effects, The Weekly Photo 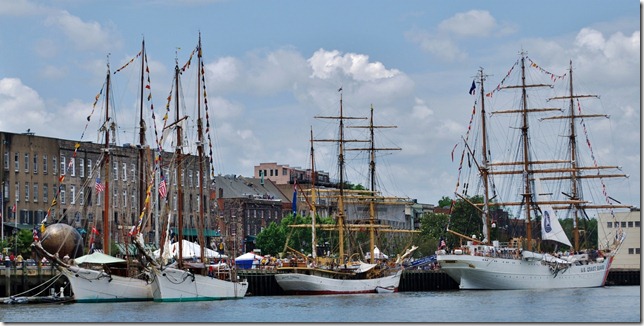 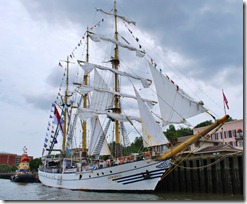 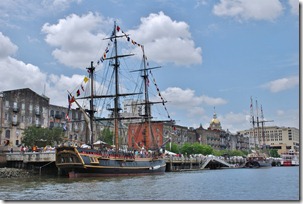 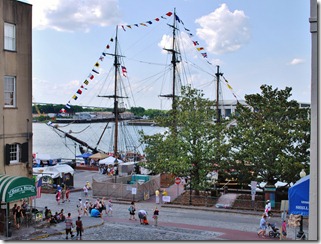 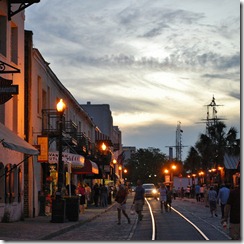 Posted by Ludwig at 5/11/2012 08:53:00 PM 1 comments
Email ThisBlogThis!Share to TwitterShare to FacebookShare to Pinterest
Labels: photography

This weeks photo was taken during that period when the sun is highest in the sky. Photographers are admonished to avoid this time of day – the light is harsh, the shadows dark and deep, the angle of the light is unflattering … All that is true, but even the high noon time sun can provide some magical light and allow some subjects to be at their best.

The photo for this week is a leaf. There are other leaves in this picture, but the high sun played just beautifully with the texture of the central leaf. 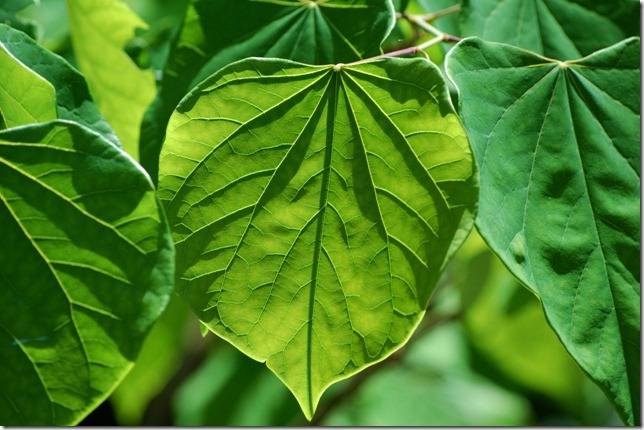 No trickery or post-processing magic here, just light and shadows. I loved the way the structure is highlighted and edged with wide shadows. 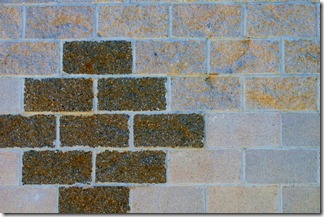 The texture of vertical object can be well photographed with the high sun angle. A wall, like here in flat light, shows the colors but essentially nothing of the texture. Light at a steep angle can bring out the real look and feel of these walls as shown in the next two images. 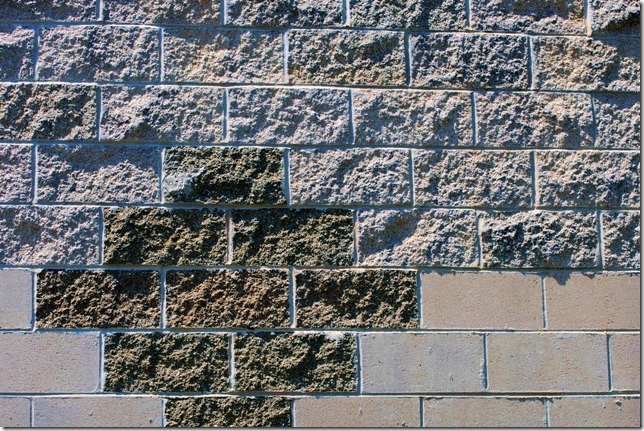 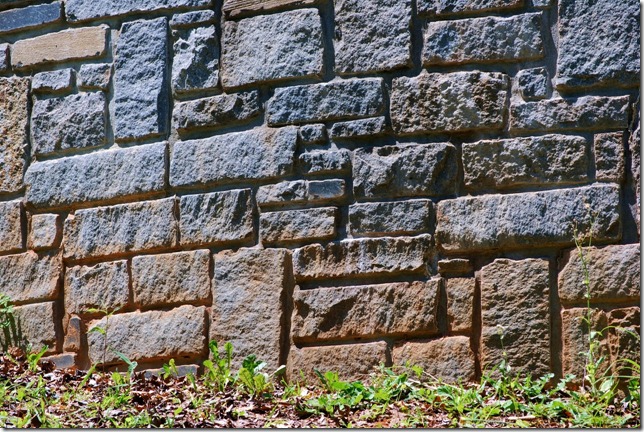 The high, noon-time sun may not work at all for portraits of people, but don’t dismiss this kind of light as too limiting. Many subjects can be well photographed in the overhead sun. Mid-day is not just for siestas, so squint if you must, but look for picture opportunities. Here two more images to show that harsh down-light can be flattering after all. 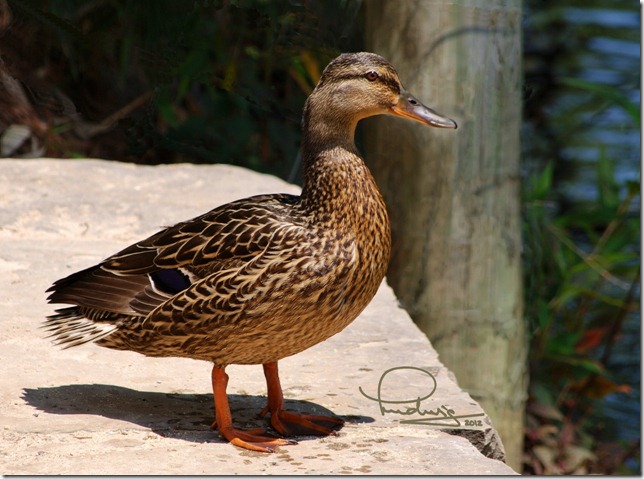 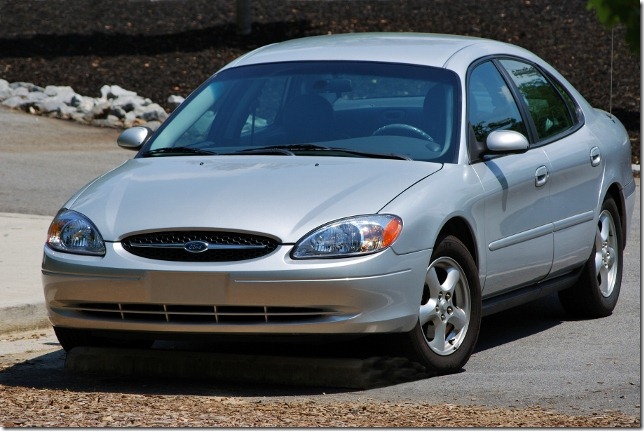