When the light is bad

When the light is bad – make art!

Summertime brings lots of outdoor activities and pleasant evenings. Pleasant evenings bring summer concerts on stages large and small. We seem to be drawn to the concerts in Duluth, Georgia. The town green slopes nicely and has some terraces, there is a fountain for the children to play in, and a stage just fine for a small town concert.

When its time for the concert the fountain is tuned off and the music begins. It is all very enjoyable. 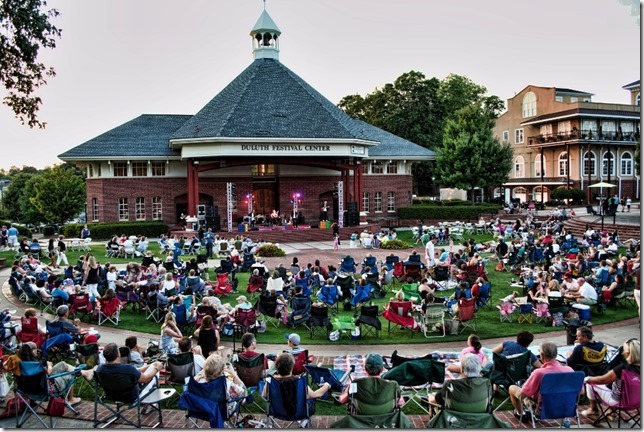 For us photo enthusiasts it is a bit of a challenge. The stage lights are not exactly designed with photography in mind. The lights are fixed and as the performers move about the stage the lightings on them changes from bright to dim to not at all. When color effects are used that compounds the problems. As the sun sets and daylight turns to night the photo challenges increase.

For this particular evening I decided to go for “café art” images, making use of the lights as best as I could. The first step, of course, was to use the camera on manual settings, no way could the camera exposure control figure out what I was after. Image manipulation was done mostly in PaintShop Pro and Topaz Simplify.

The Members Only Band did a fine job. I just hope my images convey just a little of their intensity. 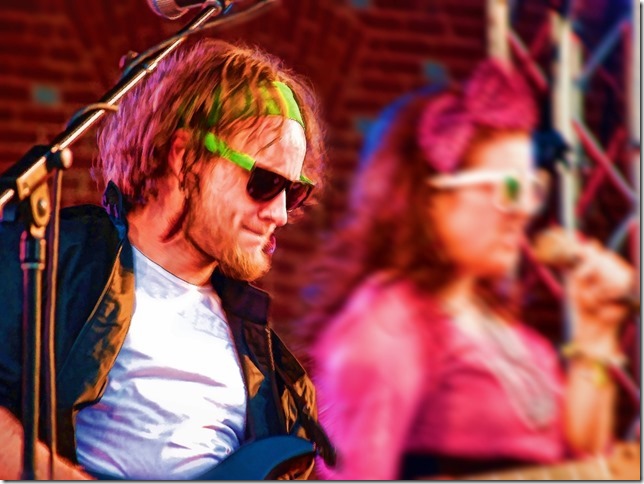 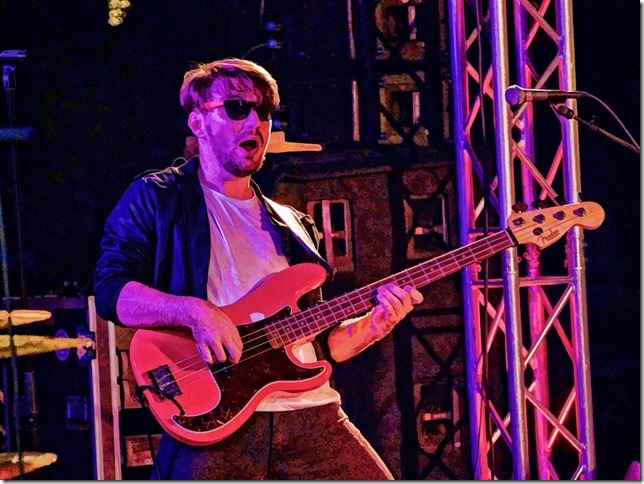 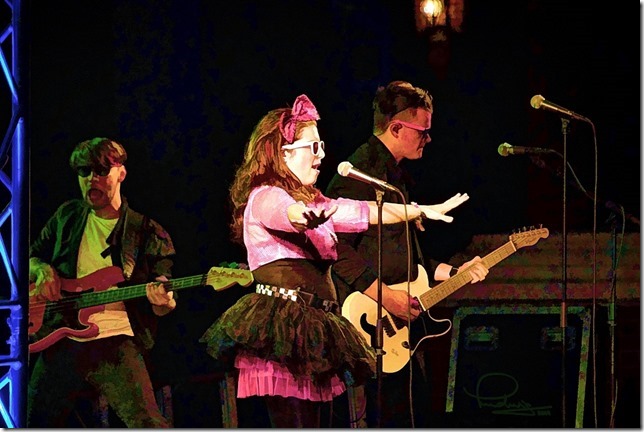 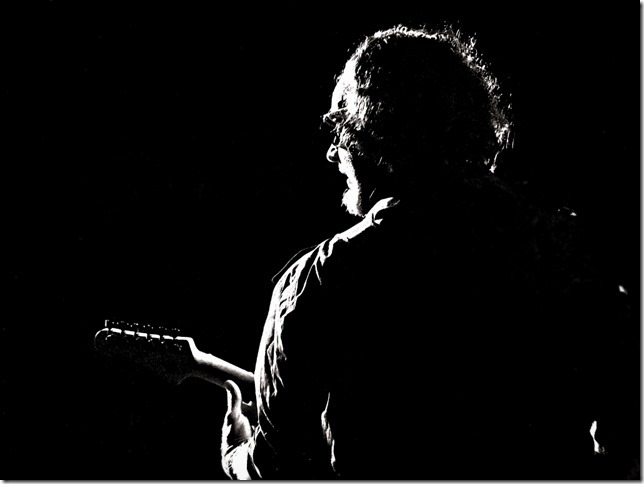 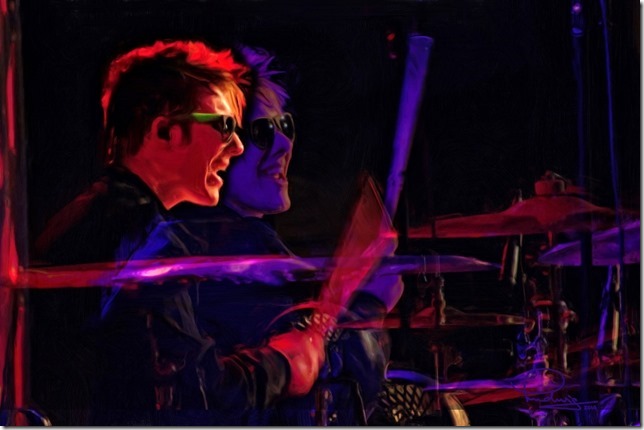 So read the subject line of the email from the “Images of Nature” event host. Really? My little yellow friend is getting his fifteen minutes in the sun?

But we are already way ahead of the story, so let’s go back to the beginning. I use Photo Gallery for the import task from camera to computer. It is set to create a folder for each “date taken” and the photo files are serially identified by the camera. I am also reasonably faithful in tagging my photos.  On my WordPress blogs where I share most of my images each post is dated, of course, and the statistics are nicely maintained. The source location is typically a OneDrive album and that shows the date a photo was added. All this makes going back in time and reconstructing the events of the past delightfully easy.

The day did not start out very promising.  It was raining. I had been participating in a very enjoyable and productive black and white photography learning group for more than half a year, there were weekly assignments which buoyed my enthusiasm for photography. The current assignment was “selective color”. Rain isn’t very colorful. I took just a few pictures, actually I can tell you that I took 13 photos before lunch.

Then the weather changed for the better, the rain stopped, the sun came out, there was color! My wife and I set out for our favorite park for an afternoon stroll – and some photos.

Sixty-three more pictures that afternoon, a mushroom, some trees, other hikers, grasses and flowers, a spider, a rabbit, a bumble bee, fifteen exposures of a butterfly and eight shots of a little fly on a yellow flower. Not a bad haul for a day that seemed so bleak in the morning. The first of the eight photos of the little fly was time-stamped at 14:51:22.1 the last 14:52:15.7. Just under 54 seconds. It hadn’t drawn that much of my attention, but more was to come.

The butterfly made it to Gallery Ludwig the next day. Also that day, July 21, 2013, later in the evening, the Gallery Ludwig post Flower and Friend brought our little hero of this tale to the world.

Now this wasn’t the photo that would bring him fame. So let me go on with the story. Preparing an image for the B&W group meant doing diligent post-processing. I chose one of the photos, as it turned out the third one of the group of eight, as that had the right combination of characteristics for this task. After hours of work I shared the resulting image with the learning group. At that time I was also working on an article about enhancing photos using the effects tools in Picasa. I used this photo for one of the illustrations.

The article was published on my Café Ludwig blog on July 24, 2013, as Enhancing photos with Picasa effects tools. This included image was not the “final” version of the enhanced photo. That version did not get to my blogs or sharing sites since I had placed other versions there already. It was the culmination of a lot of efforts, so the “final” version became a member of my Fine Art America catalog that same day.

Had fame been attained? Hardly. The article got its share of views, some 500 since publication, it gets one or two visits a day. A few dozen folks stumbled on my offering at FAA. Not what you could call fame.

There were many other photos that interested me, other tasks, and my little friend receded into the shadows. Then a couple of months later I prepared to lead an assignment in my B&W learning group, the topic was composition. It seemed like a fine topic to share more widely. Indeed I picked two venues, my mostly technical blog, Photography Notes and Tips, where the article appears as Composition Rules on November 1, 2013. The other publishing venue is MagCloud where it appeared on November 7, 2013 and is  available in printed or downloadable versions. 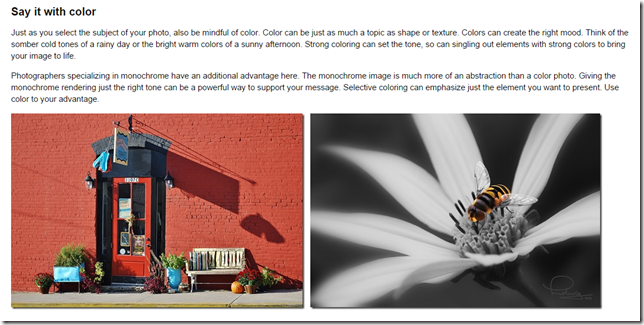 The composition article and pamphlet feature the B&W selective color version of our hover fly. 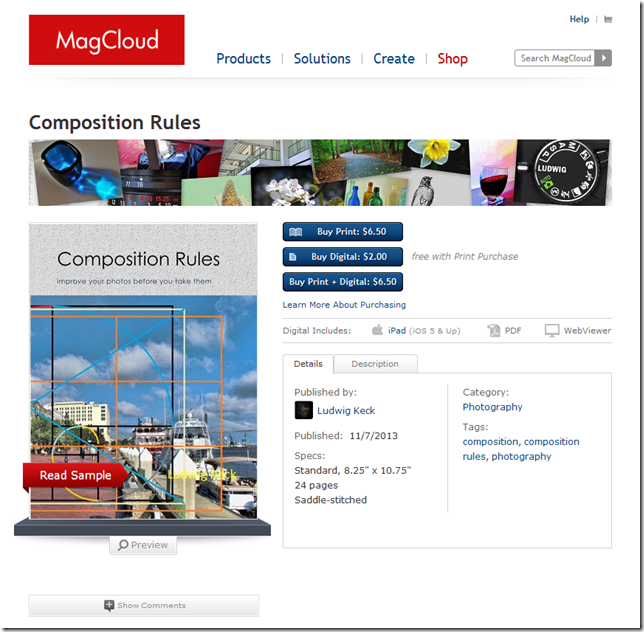 The PN&T blog is too obscure to garner much fame, but the composition booklet made the home page of MagCloud under “What we Like”. It stayed there for some months and now can still be seen on their next page. You can’t say that the image is now famous, but the booklet has gained steady but very modest sales.

But things were about to break for “Besi” our little hover fly, scientifically known as syrphus ribesii: I decided to publish a calendar. I collected a group of candidate photos that I had taken throughout the previous year. When I pruned the collection down to thirteen, “Hover Fly on Flower”, was among them.

The hover fly image had all the attributes for a good advertising photo, simple composition, one well-defined subject, good leading lines, and above all very compelling color. Yellow on black is the most visually catching combination, and this image certainly comes close. So, I chose it for the cover. 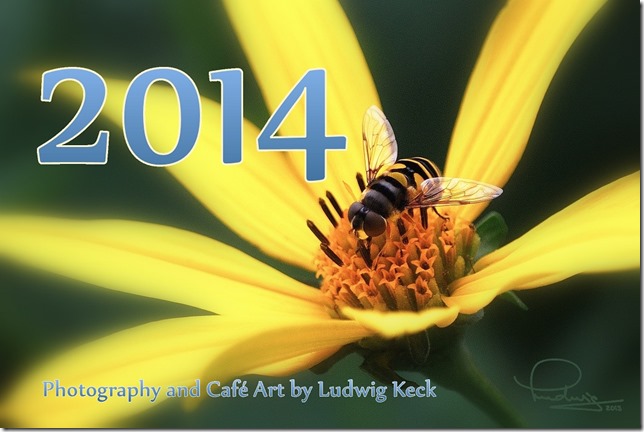 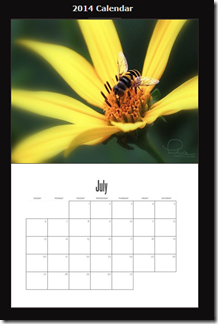 Fame at last? Getting there is hard to do, even for a little, half-inch fly. Or maybe especially so. It was December 3, 2013, when Calendar 2014 published on MagCloud. By then most folks had already picked the gifts for their friends. Calendars are very seasonal products. So I missed the marked with this offering. The few buyers probably have no idea of the rarity of their possession.

Time passed and I devoted my time to other photos and other tasks.

Then an invitation came across my monitor, there was going to be a photo exhibition at the Rectory in Norcross. Norcross is a neighboring town that is making a name for itself as an interesting and fun place with restaurants, unique shops, galleries and a lively art scene. The idea appealed to me. The Rectory has been the site for some very enjoyable exhibits. I had done an article on one of them: This Aint Your Grandmother’s Quilt (the colloquial language of the title was intentional). Any exhibit there should be fun. I decided to enter a couple of photos to this juried exhibition.

The sponsoring organization, Georgia Nature Photographers Association, was unknown to me. Juries have their own character and I had no idea what sort of images would resonate with this one. I decided to submit a couple of different styles in addition to my best two that I thought fit the theme “Images of Nature” perfectly. I was, and still am, honored and thrilled that they picked a photo of mine at all. They picked two!

Of course, the jury didn’t pick what I thought they should, they selected two others, including “Hover Fly”. Now here came the chance for this little beastie to be seen by happy crowds.

But there was more, and this gets us back to the email with the “Hover Fly is Famous” topic. The presenting organization, the City of Norcross Cultural Arts, had picked my photo as one of the images for their publicity ads. 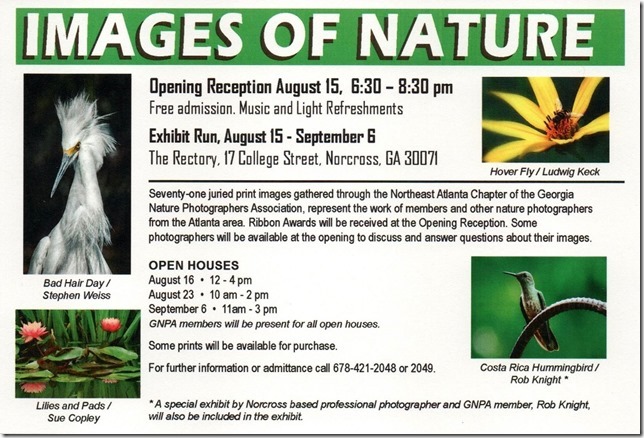 Not only for the invitation cards, but the posters too. What is more they chose it solo for the city events calendar page. 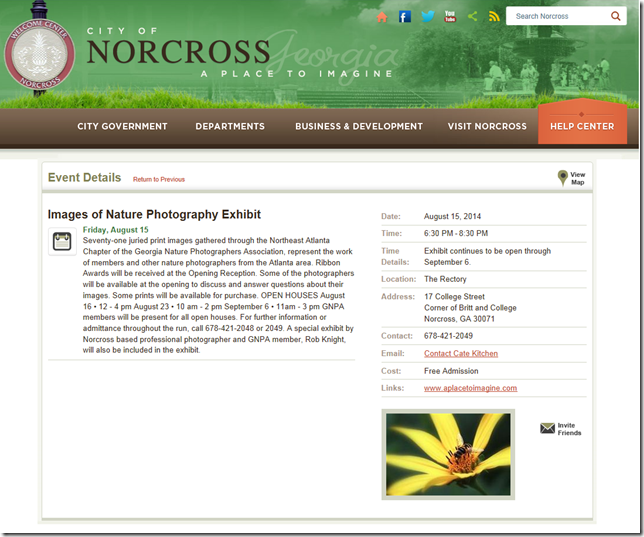 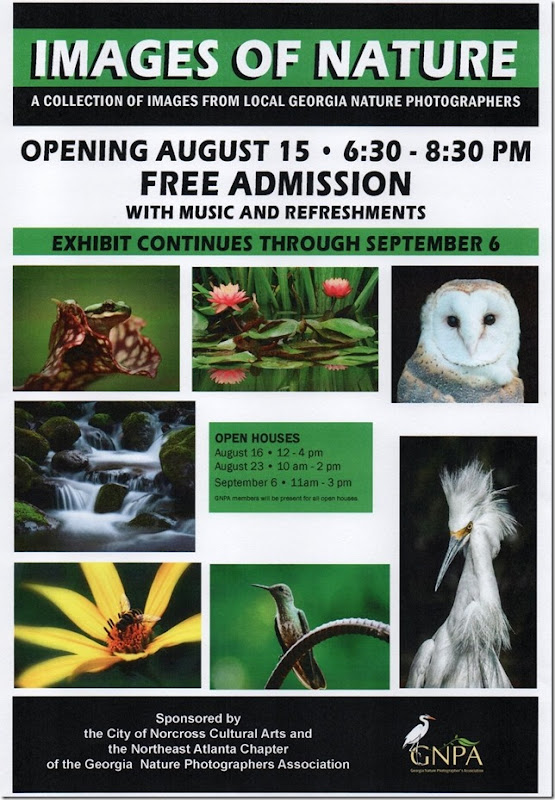 So there you have it my friends. Fame has come to “Hover Fly”. Oh, oh, I think we are already past the fifteen minute limit. Thank you for staying with me. Hope to see you at the exhibit!